Data Visualization is the study of the visual representation of data, meaning – information which has been abstracted in some schematic form, including attributes or variables for the units of information –
Michael Friendly (2008)

Combining Data Visualization with several Graphic Design processes, I was able to design some media focused on the Mexican Wrestling Society. 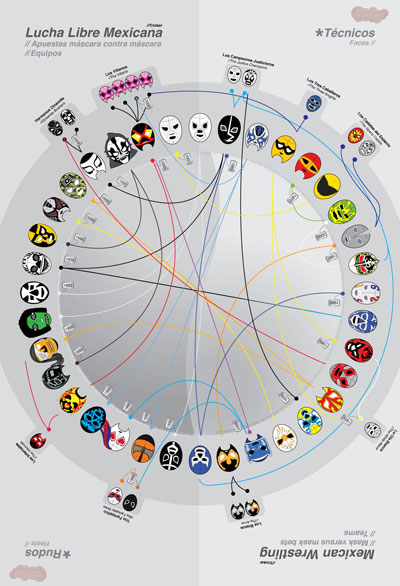 In Mexican Wrestling there are bets in which wrestlers gamble their masks against other masks, hair or ever careers. This data visualization poster displays these relationships between wrestlers and who has won against who.

The arrangement of the elements can be presented in several ways.  The poster can be placed facing up to be in Spanish, and upside down to be in English.  On the left side we can appreciate the main rudos (heels), and on the right side the tecnicos (faces).  Inside the main wheel, the relationships of the matches are presented with a colour line, depending on the character, along with the year the event took place.

On the external circle we can view the teams that wrestlers created as alliances depending on their wrestling style or by the type of character they represent. 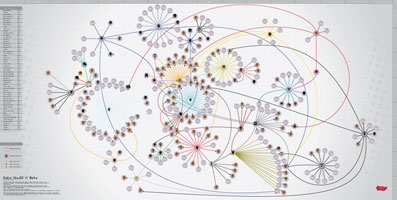 This is another poster that represents Social Networking in Mexican Wrestling.

The poster is using over 120 wrestlers on the database.  The information displayed covers the wrestlers who lost the masks, hair or beard and who did they lost it against.

The information is displayed like fractals in which the winning character behaves as a main cell from where the rest of the elements expand representing the defeated making an exponential division for each wrestler. The poster contains a grid to allow the viewer to locate faster a desired wrestler and find its coordinates.

The methodology  for this Visualization was based on centrality mapping.  This means on the number of direct connection that each node has and analyzing the nodes that contain the biggest network reach and boundary players to increase the amount of peripheral players and increase the size of the visual, since they will become then the central node.

The first step was to pre-visualize which nodes were the longest and had more network reach.  In a sense I knew ( as it has been part of my research ) which wrestlers had more reach, taking in considerations issues like: family member, championships and time in the industry.  So the first thing that I did was a mind map to have a clear idea of what I was going to need.

After finding out how roughly the information was going to be displayed, I needed to define the main iconography system.  So I needed to represent:

Here is the result of my icon system and representation.

A main circle is designed to contain the main elements.  The circle at the same time will contain a ring on the outside that will appeal to the character and the inner circle will be always the same colour.  The colour of the ring then will be used as the connection line for the vectors.

Since not all the characters will behave as central nodes, I placed them within a dark magenta circle.  This circle will be used mainly for all the loosing wrestlers.

After defining the circles I could just place the representation of the mask and their name in gray just underneath it.

Since I wanted to keep focus on the central nodes, I developed a template mask that is used on all the non-central (loosing) nodes.

These two icons represent the hair and the beard.

The mask, beard or hair icons can be placed on big scale on the center of the circle to represent the character.  If the icon is placed on the ring of the node, then that represents the type of wage that took place on the event.  The wage icon will be placed on the loosing node.

This is an interactive interface developed with Moowheel, a JavaScript library licensed under an MIT-style license.

Using the output of the last data visualization poster, I developed another interface allowing the user to interact with the information.  The user can click the name of the wrestler, redirecting him to the a database in LuchaWiki, in which the personal biography of the wrestler will be displayed.

The main wrestlers have an icon next to the name, in order to recognize them faster.

Ideally this interface is meant to be projected on a wall as static artwork, regardless of its interactivity.

Through this visualization we can appreciate that the wheel is mainly connecting to the same side where the original node (wrestler) starts.  Usually wrestlers have popularity periods in which they are promoted to have more bet matches to promote the character.  There are a few characters or nodes that actually cross the circle and go to the opposite side of the wheel, these nodes are mainly the wrestlers who have a big wrestling tradition or big names in the industry only a few wrestlers manage to continue winning these type of matches even after their siblings also start winning these bets.

Here is an example of how the interface works.  The interface can be also displayed on a full screen in Firefox.

This site uses Akismet to reduce spam. Learn how your comment data is processed.